"This royal house belongs to the charming Xine. Read Thoreau through the maze as you meet her. Use your wits: which switch is safe? Walk on the magic sandbar." - In-game description

The instant you pick up the Enitsirhc Coat of Arms, every NPC on the map will be angered. As a reminder for those that would care about their alignment, not every angry NPC is evil. A scroll of Escape to Outer Terra is recommended, or use of the Home other spell. 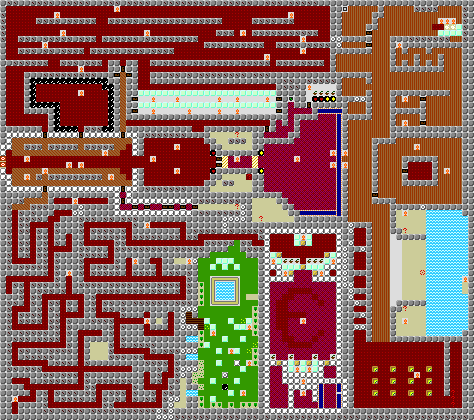 It says "Hi dan" in letters north of the auto teller.

"I was not born to be forced. I will breathe after my own fashion. Let us see who is the strongest. What force has a multitude? They only can force me who obey a higher law than I. They force me to become like themselves. Henry David Thoreau... I perceive that, when an acorn and a chestnut fall side by side, the one does not remain inert to make way for the other, but both obey their own laws, If a plant cannot live according to its nature, it dies, and so does man."

The bottom of the map reads "Coming soon to a Macintosh near you: TaskMistress"

Retrieved from "https://taskmaker.fandom.com/wiki/Enitsirhc?oldid=4289"
Community content is available under CC-BY-SA unless otherwise noted.