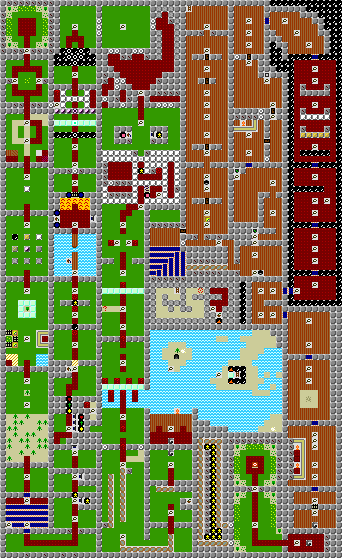 "This is the TaskMaker tutorial! See Keyboard Help in the Play menu if you need help moving" - In-game description

The Tutorial is an optional level within the game. Its intent is to explain the features and navigation of the game to a new player.

Throughout the level, Magic Mouth tiles will appear. Step on one to read its message. Most of these explain the various contents of the level.

The first section of the level explains various forms of tiles (floors, walls, curtains, etc.), and teaches the "examine" command. After turning the corner, the next segment explains the use of push buttons, on/off switches, and floor traps to open up pathways. In the tutorial, they are used to remove walls, deactivate force fields, lower a drawbridge, and open a set of metal bars. Going north, the player is then taught that certain walls may be walked through.

A set of stairs leads downward to the next room, which presents the player with a ship. Sail north into the Cave, then reveal the path to the switch by using a floor trap. Flip the switch then sail east to the next island, where there is a ladder leading upward. Once up the ladder, the next room explains the use of the Skeleton Key to open doors. Near the end of this room, the player is also shown how floor safes and stone compartments may conceal items.

To the east and north, the next room presents the player with certain forms of precious metals and gems (starting with a Bar o' Gold concealed in a floor safe), and the use of the Auto Teller to convert them to the in-game currency. A curtain then reveals the first shop of the Tutorial, where the player may purchase more keys. The next room teaches the use of the Recycle Bin to obtain money from the deposit of garbage.

Afterward, the player is offered a box of Rations and told the importance of the Food bar. Following this, the player is then given a Magic Map and Ethereal Potion to instruct on the use of magic scrolls and potions. The next room offers the player a Dagger to teach in the use of Weapons, followed by a few pieces of Armor, three more weapons (Spear, Boomerang, Pea Shooter), and finally the Shovel, which may be used to dig up treasure.

The next room has a pair of weapons shops at which the player may sell their already-provided weapons and/or buy new ones. The top one features single-hand weapons, while the bottom one features ones that require both hands to operate.

Finally, the player is taught how to bend iron bars to reveal the path onward. The stairway down leads to the last room, which itself leads to the exit to Outer Terra. 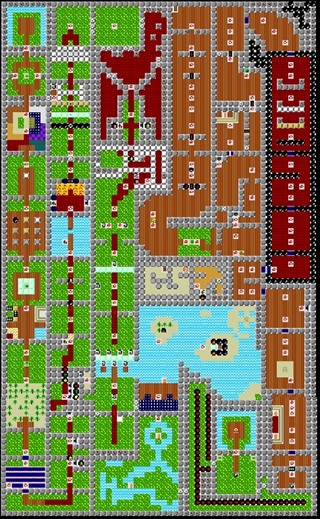 Angel: The angel in TOTTM Tutorial is named Suzan and she can be found near the end of the tutorial. From the next to last room, go through the passwall in the Southeast corner to find a Bucky's Famous Beef Stew that you can Bestow to her. Then go through the passwall in the Northwest of the same room and follow the path to the lake where Suzan lives.

Other pickups unique to the TOTTM Tutorial include:

Retrieved from "https://taskmaker.fandom.com/wiki/Tutorial?oldid=4438"
Community content is available under CC-BY-SA unless otherwise noted.